​Wendy and I decided to take the kayaks again from Alcova to Casper. We've had an ongoing problem with our sleeping mats separating in the night as we cuddled together. In the past we've tried clamps meant for tarps, and even made holes in the sides and used nuts and bolts to hold them together. Nothing worked. So Friday night I had yet another bright idea and thought maybe I could make a sleeve out of fabric to keep them from separating. So we picked up some fabric from Wal-Mart. I hemmed the sides and sewed it into a tube.

Not being in any particular hurry we gathered all of our stuff, made yet another trip to Wal-Mart and headed out to Alcova. We dropped off Wendy's Acadia at Robertson road and went
​  to the Chalk Bluffs campground where we planned on spending the night. Our plan was to just stash some wood to make a fire but there was so many people there that Wendy suggested that we pitch our tent to claim our spot. I was down with that and seeing as we were leaving our tent we thought we might as well leave all our clothing and whatnot. We paid for our spot and left our stuff. As a side note when I grabbed an envelope to leave our money somebody else has unwisely left their money filled envelope right there where you grab them as opposed to the secure spot where you leave them. Well we laughed and put their money where it was supposed to go, along with ours. So off to Alcova we went.
We left the Accord at Gray Reef and launched with little drama (for once). Both kayaks held air like a champ. This first trek would take 6 hours according to this pdf. We managed it in 4. We sang many songs on the way to entertain ourselves.

Back at Chalk Bluffs for the night we made a camp fire and I think we were both counting the minutes until dusk, super tired from the day. Dusk fell and so did we. We like a little candle lantern of ours. It provides a little light, a little heat and frankly makes the tent seem homey. Come sunrise the candle lantern was out and wax was everywhere. It leaked in the night. It wouldn't be so bad if it wasn't for my hand made 750 fill power down custom made quilt. So many hours went into making that thing. But as I said to Wendy at the time it's much like a hard hat in a construction site. If your cap looks brand new it just makes you look green. A few war wounds are a good thing. And the super lightweight fabric I used to make the quilt shed that wax like nobody's business. So we packed everything up and left the tent again to pick up later. The sleeve holding our mats together worked great.

Their was a nest in the top of the pavilion we camped under. The nesting pair was none too impressed with our presence. 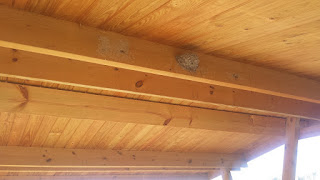 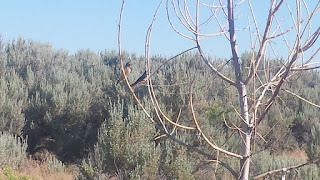 She returns in spite of us. 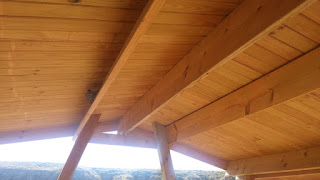 We trekked on down the river. We stopped at Bessemer Bend for some lunch. As we were leaving some gals in floats asked if we had a pump. Their electric one had failed. We let them borrow our hand pump. One of them got over enthusiastic and broke it. They tried to fix it on the sly but it just wasn't working right. I came over and opened it up, there was a gasket that got out of whack. We put it back in place and it worked again. Yet another time they got over enthusiastic and broke it again. They knew we were waiting on them. Again I opened it up and this time the main stem came loose but I got it working again. There were multiple times where Wendy or I was trying to tell them to mellow out a little. But eventually all their floaties were aired up and we carried on our way.

When we landed at Robertson road we were deflating and loading up when there were another group of even younger girls and a guy with floaties and the type of pump you'd use to fill up a bicycle tire. I offered our pump to them as well and they gratefully accepted. Their floaties were beyond repair and could not be inflated. Eventually they asked if I wanted the pump back. Only kids that young could think returning the pump was optional.

All in all the second day took 6 hours as opposed to the pdf referenced above that said 8. I won't lie, by the end of it my arms were just plain dead. But we made it. And I'm sure we'll do it again.